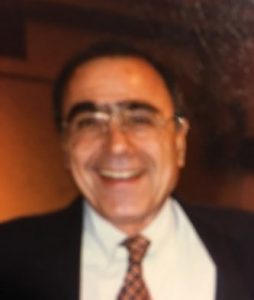 Westborough – Donald Pera James, 85, of Westborough, formerly a 45-year resident of Framingham, died peacefully at home Monday, Aug. 21, 2017 in the care of his family who loved him greatly, hospice, and a group of dedicated CNAs.

He leaves behind his wife of 56 years, Anita (Harton); his daughter, Lisa Jenzeh of Wayland; son, Bryan and his wife Rose of Framingham; and four grandchildren, Lily and Jacob Jenzeh and Anthony and Nathan James, of whom he was very proud. He was predeceased by his sister, Marie Cannon of Indiana, and his brother, Dr. Samuel Jacobs Jr. of Greenwich, Conn.

Mr. James was born in Philadelphia, Pa., the son of the late Samuel Jacobs and Lucy Pera Jacobs. He was educated in the Yonkers, N.Y. public schools. He attended Cornell University, graduating in 1954 with a degree in industrial and labor relations. While there, he excelled in athletics and was inducted into Cornell’s Hall of Fame for his excellence in baseball as an infielder and hitter. He was a recipient of the Dr. Albert Sharpe award as the team’s MVP in both 1953 and 1954. A two-year letter man in basketball, he was the Cornell sun athlete who most exemplified the best of Cornell athletic traditions for four years.

As a First Lieutenant in the Army Artillery 5th Division serving in Germany, he was appointed the flak baseball coach for the 1956 season.

He worked for Foster Wheeler and Potter Instrument in New York before settling into a long career with the Raytheon Company, working in Wayland, Burlington and Lexington in various human resource capacities. He was a longtime member of the Raytheon golf league. He was a member of Cranberry Valley Golf Course in Harwich, where he had a summer home for 28 years.

St. Andrew’s Episcopal Church in Framingham was his spiritual home for many years, with him serving on the stewardship committee, the vestry and working with teens preparing for confirmation. In 2011, he became a member of St. Stephen’s in Westborough, where he continued his spiritual journey.