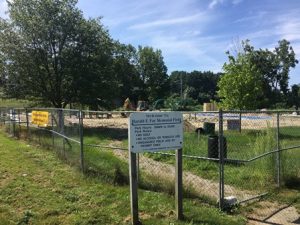 Southborough – A group of Southborough parents are campaigning to close the funding gap on the replacement of the Harold E. Fay Memorial Park, also known as Fayville Park, after a windstorm demolished several areas of the playground, prompting the town to close the park last summer.

Parents like Leslie Leedberg of Southborough, were left “devastated” after the windstorm damaged the park’s main pavilion, downed several trees, and other areas of the park. Leedberg said, “It’s a great, centrally located place for many playdates, picnics, and pick-up basketball games.” 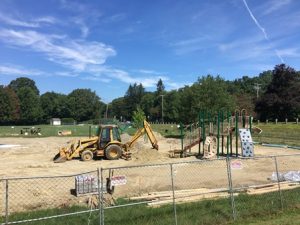 The beloved park is one of two public parks in the town of Southborough and “by far one the most popular,” according to Doreen Ferguson, director of Southborough Recreation. The park, located on the Sudbury Reservoir on Central Street is used by many residents in town and from surrounding communities.

Last summer, the Southborough Recreation Commission and the Department of Public Works planned to update the then-outdated wooden structured park, which was last updated in 1998 thanks to the hard work and generous donations of local residents, businesses, and the Recreation Facilities Committee.

After the windstorm completely demolished the park, modifications to the park’s plan were made, this time, with a few enhancements from the input of parents, which requires additional funding.

The $329,000 park, scheduled to open mid-to-late September, will be ADA compliant and feature a new basketball court, a toddler play structure designed to look like a tree fort, swings, a pavilion, walking path, a grass area for free play and picnics, and more.

“We are looking forward to having a beautiful new park that is a fun place for everyone to gather, once again,” said Leedberg.

Southborough parents are looking to raise $27,000 by Tuesday, Oct. 3, at midnight through a crowdfunding site. Donations are accepted online and are tax deductible.

A ribbon cutting celebration and a rededication ceremony to Harold E. Fay, Southborough’s first resident killed in World War II, will take place in October. Supporters of the rebuilding effort will be displayed on a banner at the park. A donation of $500 or more will have the donor’s business or family name displayed on a permanent plaque.

Southborough gets a head start on celebrating Halloween