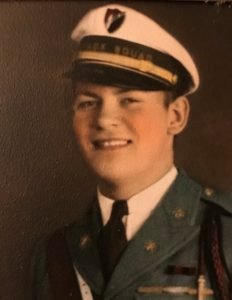 Shrewsbury – Ralph E. Heim, 98, of Shrewsbury, passed away peacefully Saturday, Oct. 7, 2017 at home. He was the beloved husband of the late Jeanne N. Heim.

Born Sept. 17, 1919 in Evanston, Ill., he was a son of the late Carl and Alice (Riorden) Heim. Ralph proudly joined the United States Army and served during WWII as a First Lieutenant Signal Officer.

He earned his bachelor’s degree at Carleton College in Minnesota, where he also met the love of his life, Jeanne. They were married in February 1942.

Ralph was employed as the president of Bird & Son in East Walpole before his retirement. He enjoyed traveling, woodworking, home improvements, painting, gardening with Jeanne, and deep-sea fishing on the Pacific Ocean while living in California.

He was a very active volunteer for SCORE small business advice, a nonprofit organization with counselors, advisors and mentors who help entrepreneurs and business owners. Ralph also volunteered for many organizations at Southgate of Shrewsbury, where he lived with Jeanne for 20 years.

He is survived by two sons, Thomas M. Heim and his wife Joanna of Westborough and David B. Heim of Framingham, and three grandchildren, Russell, Jeffrey and Gayle Heim. He was predeceased by his brother, George Heim.

Services and internment are private.

In lieu of flowers, donations in his memory may be made to SCORE at www.score.org/content/donate.

Arrangements are under the care and direction of the David A. Pickering Westborough Funeral Home.