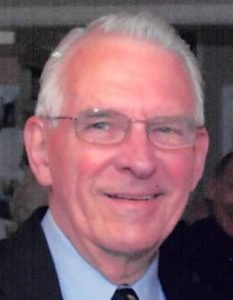 North Grafton – John F. Martin, 91, of North Grafton, formerly of Westborough, passed away peacefully Friday, Oct. 20, 2017 at home, surrounded by his loving family. He was the husband of Ann M. (Moran) Martin, to whom he was married for 60 years.

John was employed as a product engineer for Bay State Abrasives prior to his retirement. He was a communicant of St. Luke the Evangelist Church, where he served as a Eucharistic Minister and taught CCD. He coached Little League in Westborough and was a member of the Sodality of Our Lady at Holy Cross College and had taken three trips to Medjugorje. He was a volunteer at the Westborough Food Pantry and at UMass Medical Center. He enjoyed woodworking, gardening, bread making, reading and golf.

In lieu of flowers, donations in his memory may be made to the Marian Helpers at www.marian.org.