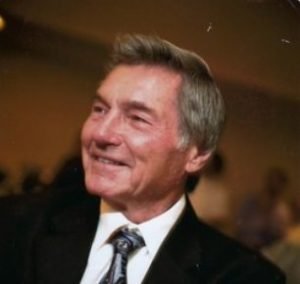 Thomas was born in Worcester, a son of the late Thomas J. and Rose E. (Gentile) Walsh. He enlisted in the United States Army in 1957, serving his country proudly until he was discharged to the Army Reserves in 1959. During his time in the military, he played baseball for the armed forces playing all over Europe.

Tom worked as a bar manager for 45 years for The Four Seasons Restaurant and Mount Pleasant Country Club. He lived in Worcester and Shrewsbury most of his life where he was a member of St. Mary’s Church in Shrewsbury. Tom later moved to Daytona Beach where he and his wife Jean settled in to enjoy their retirement years.  Tom loved playing golf and spending time with family and friends. Jean was a devoted wife who provided great love and care for him during his battle with Alzheimer’s.

Tom’s first wife, Janice M. (Genise) Walsh, passed away in 1977. He is survived by his wife of 24 years, Jean (Bjorkman) Walsh; his son, Timothy P. Walsh and his wife, Christine, of Shrewsbury; his daughter, Kellie Walsh and her longtime companion, Rupert Rogers, of Nyack, N.Y.; two step-sons, Jeremy Wentworth of Scottsdale, Ariz. and Jason Wentworth and his wife, Krista, of Auburn; a step-daughter, Lisa Luzzo and her husband, Mark, of Centerville; nine grandchildren, Patrick, Christopher and TJ Walsh, Nicholas, Tyler and Celia Luzzo and Emma and Leah Wentworth; two sisters, Catherine Cosmo of Shrewsbury and Jean Vancelette and her husband, George, of Worcester; and nieces and nephews.

Relatives and friends are invited to a period of calling hours Monday, Nov. 13, from 9-11 a.m., with a funeral service to begin at 11 a.m. in the MERCADANTE FUNERAL HOME & CHAPEL, 370 Plantation St., Worcester. Interment to follow at St. John’s Cemetery, Worcester.