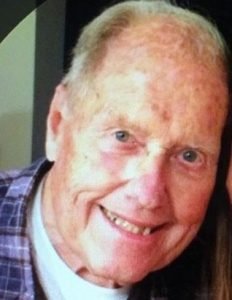 Hudson – Vincent J. Carter, 89, of Hudson, passed away peacefully Monday, Nov. 6, 2017 at Reservoir Health Center in Marlborough, surrounded by his loving family, after a period of declining health. He leaves behind his beloved wife of over 66 years, Shirley E. (Mura) Carter.

Vincent was born in Lawrence, where he was raised and graduated from high school. After graduation, Vincent proudly served his nation in the Merchant Marines.

Vincent married the love of his life, Shirley Mura, on Oct. 27, 1951. In the early years of their marriage, they resided in New Bedford, Worcester, and Westborough, before eventually settling in Hudson, where they have lived for the past 52 years.

Vincent worked for Sealtest, a division of Kraft Foods before his retirement.

Vincent was a well-known and active citizen in Hudson, serving as an Auxiliary Police Officer for many years. He was also a longtime member of the Hudson Elks, where he was a Past Exalted Ruler, Past District Deputy and Bingo Manager. Above all Vincent will be remembered as a dedicated and hardworking family man, who was warm, funny, and very intelligent. Vinny had the best sense of humor and was always ready with a corny joke in hand. His favorite hobbies were playing the piano, building stone walls and smoking cigars. He especially loved the holiday season and will be remembered best by his neighbors, for his Christmas decorations which won him several awards.

Calling hours will be held Saturday, Nov. 11, from 4-7 p.m., at TIGHE HAMILTON REGIONAL FUNERAL HOME, 50 Central St., Hudson. A funeral service will be celebrated Sunday, November 12, at 10 a.m., at the funeral home; followed by a procession to Forestvale Cemetery in Hudson for final committal.

In lieu of flowers, memorial donations can be made in his name to the Hudson-Concord Elks Bingo Scholarship Fund and mailed to Hudson-Concord, MA No. 959, PO Box 306, Hudson, MA 01749-0306.