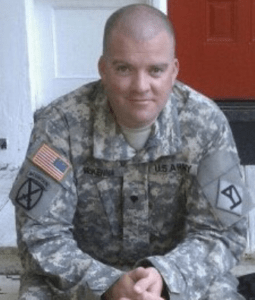 Westborough – Sgt. Stephen J. McKenna, 41, of Westborough, passed away peacefully Tuesday, Nov. 21, 2017 at home, surrounded by his loving family. He was the devoted husband of Tracy A. (Gorman) McKenna.

Born in Boston, he is the son of Harry McKenna of Westborough and the late Jeanette (MacDonald) McKenna. He was raised and educated in Natick and was a 1995 graduate of Natick High School.

Steve joined the Army National Guard in 2006 and was assigned to the 772 Military Police Company.  In 2008, he deployed to Al Kut, Iraq in support of Operation Iraqi Freedom. Sgt. McKenna was awarded the Army Commendation Medal, Army Good Conduct Medal, Army Reserve Component Achievement Medal as well as many others. He returned to the 772 Military Police Company and has been assigned there since.

In addition to his wife and father, he is survived by four children, Logan, Hayden, Ava (Goulet) and Griffin McKenna, all of Westborough; his sister, Maureen McKenna-Weber and her husband, Scott, of Westborough; two brothers, Robert McKenna and his wife, Jennifer, of Milton and Paul McKenna and his wife, Kara, of Denver, Colo.; his in-laws, Michael and Alyce Gorman of Marlborough; and many nieces and nephews that he was so proud of.

Steve’s greatest joy was spending time with his family. His love of Boston sports was legendary as was his love of all things history. He is remembered by so many for his genuine kindness and his ability to make people laugh with his quick wit.

In lieu of flowers, donations in his memory may be made to Dana-Farber Cancer Institute, PO Box 849168, Boston, MA 02284-9168 or at www.dana-farber.org. #McKennastrong