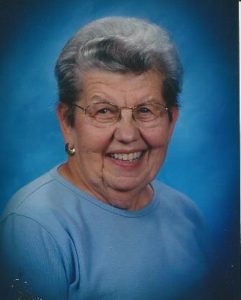 Born July 5, 1928 in Grafton, she was the daughter of Alexander Pietruskiewicz and Stephania (Jurus). In 1953, she married Aloysius Donahue. After Al’s tragic death from cancer in 1966, Helen found joy and purpose in raising her three children and cherished time with their families. She lived for many years in Sutton and Worcester before moving to Hudson.

She was a successful bookkeeper at Morgan Construction Company in Worcester and enjoyed the company of her extended family and friends. Some of her greatest pleasures were summers on Cape Cod with her children and grandchildren, and traveling with relatives and friends.

Helen was predeceased by her husband, Aloysius, as well as her brother, Adam Pietruskiewicz. She is survived by her son, Patrick and his wife Roxanne; her son, John and his wife Kathy Jo; and her daughter, Kathleen Bussiere and her husband Marc. She is also survived by six grandchildren, Alex, Elaine, Sean and Katrina (Donahue), Nic and Meghan (Bussiere), as well as one great-grandchild, Noah.

Funeral services are being held privately with internment at St. Philip’s Cemetery in Grafton.

In lieu of flowers, donations may be made in Helen’s memory to Parlin Hospice Residence in Wayland or to the Hudson Pubic Library.

A Book of Memories to share a memory of Helen is available online at www.RoneyFuneralHome.com.