Southborough – Figure skater Jade Hom and the people that surround her on the ice don’t explicitly talk about the Olympics.

Still, using other words, they express their belief that she and skating partner Franz-Peter Jerosch might have what it takes to get there.

“She really has an incredible, special gift,” said Hom’s coach, Carrie Wall. “That’s the kind of person where, you look at her as a skating coach and go, ‘Wow, she’s going to make it someday.’”

Hom started skating shortly before her ninth birthday. Looking for a break from Southborough’s hot summer sun, Hom’s mother, Mary, signed her daughter up for a learn-to-skate program.

“It was something to keep me busy especially during the summer,” Jade said. “It just got more serious from there.”

She first focused on singles skating but soon earned Jerosch’s attention as he searched for a new pairs skating partner.

Jerosch, two years older than Hom, was already an accomplished pairs skater and would go on to compete at two national championships before the two finally matched.

Hom, however, declined Jerosch’s first invitation in early 2016 to skate as a pair, saying she wanted to continue her focus on singles skating. After another singles season for Hom and a second national championship appearance for Jerosch, Hom received another invitation.

That time, she accepted.

“I started getting interested in pairs,” she said. “I heard he was having another try-out, so I thought, ‘Oh, I’ll try again.’”

Since quickly getting comfortable skating together, Hom, Jerosch and their coaches agree they show the signs of a strong team. They now spend 30 hours each week skating with one another with Jerosch traveling to Nashoba Valley Olympia rink in Boxborough from his home in Yarmouth, Maine, for those sessions.

“We both have very similar skating styles and she’s a really hard worker,” Jerosch said. “We work really well together.”

They brought that chemistry to a national audience in early January with a first-place finish at the National Novice Level Championships in San Jose, Calif.

That victory, their biggest yet as a pair, only further prompted conversation that the two could be destined for Olympic ice in 2022 or 2026.

With a path to that point growing clearer, Hom, Jerosch and their coaches currently have their sights set on obtaining a spot in an international competition. In order to qualify, the pair will have to skate in at least one preseason exhibition and achieve a minimum score.

While she acknowledged that injury or other changes in circumstance could slow or halt the pair’s rise through US figure skating, Coach Wall is optimistic.

“This is a team that has the potential to go the distance and go the distance to the upper echelon of our sport as a senior pairs’ team,” she said, a Team USA Olympics patch pinned to her winter jacket.

Less direct but confident nonetheless, Jerosch reiterated he and Hom’s most likely path through competitive skating.

“Hopefully [we’ll skate at the] Junior World [Championship],” he said. “Then I guess we’ll move up to senior [level]. We’ll see what happens from there.”

Hom and Jerosch’s parents have formed a GoFundMe campaign to help pay for coaching and travel costs for the pair and their families. To read more, visit www.gofundme.com/jade-amp-franz-us-novice-pairschamps. 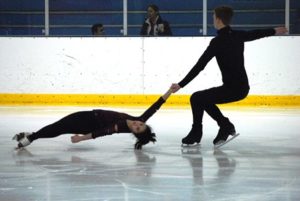 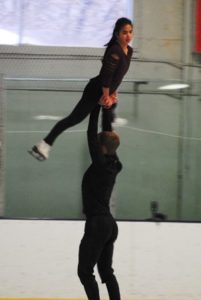