How can the Community Advocate help you promote your business?
Print Ads
Web Ads
Digital Marketing
Home Editorially Speaking Is it a bird? Is it a plane? No, it’s the ‘GOAT’!
Facebook
Twitter
Email 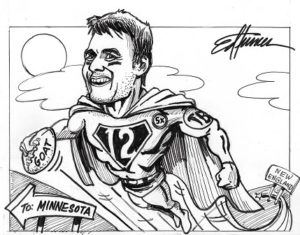 Region – After last year’s drama with “deflate-gate”, and what is arguably the most thrilling Super Bowl comeback of all time, no one would have been surprised if the New England Patriots hit a bit of a lull in this year. But the Patriots are not like other teams, and most especially, their star quarterback, Tom Brady, is not like other football players.  Throughout this past season, the team pulled out a number of last minute comebacks, delighting their fans while frustrating their opponents. Here’s hoping that on Feb. 4, Brady and company can pull off one more victory cementing his legacy as the greatest of all time.