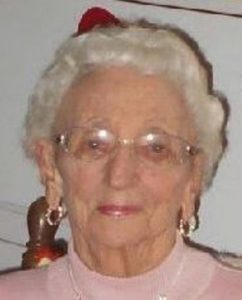 Beverly is survived by her son, Robert F. Pearo of Darien, Ga.; daughter Carol Willis and her husband Mark of Holden; seven grandchildren; 11 great-grandchildren; two great-great-grandchildren; her brothers, Raymond Burke of Rutland, Vt. and Richard Burke and his wife Jacqueline of Savage, Minn.; and several nieces and nephews. She was predeceased by her daughter, Mary T. Moshier; her brother, Gordon Burke; and her sister, Joyce Bottis.

Beverly was born March 28, 1924 in Rutland, Vt. She lived many years in Upton, where she and her husband Edgar raised their family. She enjoyed traveling to the warmth of Florida during the winters with her husband for nearly 22 years where she enjoyed biking, playing shuffleboard and spending time at the beach. She also lived in Old Orchard Beach, Maine for a short time.

She worked for the former New England Telephone as an operator for 26 years before retiring in 1985. Away from work, she adored her family and was easy to find at the card table playing pitch with family and friends.

All are welcome to gather with Beverly’s family and friends Saturday, Feb. 10, from 9:30-11 a.m., at Roney Funeral Home, 152 Worcester St., North Grafton, followed by a prayer service at 11 a.m. in the funeral home. Burial will be private at a later date.

A Book of Memories to share a story, memory or photo of Beverly is available online at www.RoneyFuneralHome.com.