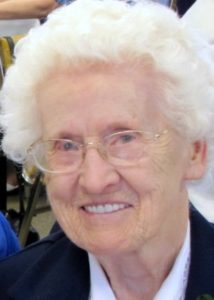 Born in St. Ignace du Lac (Quebec), she was the 3rd child, in a family of eight born to Stanislas and Lea (Prud’homme) Rivest. The family moved to Cohoes, N.Y. in 1927. A graduate of the former St. Anne Academy in this city, she earned a BA in Education from Catholic Teachers College in Providence, R.I. and held lifetime certification in teaching in Massachusetts and in Rhode Island.

She joined the Sisters of St. Anne in Lachine, Quebec in 1936, professed vows in 1938 and began a career in education that spanned the next fifty seven years.  During those years, she taught, or was principal in schools staffed by the Sisters of St. Anne in Holyoke, North Adams, Worcester, Easthampton, and Newton in Massachusetts and in Central Falls, and Manville in R.I.  She also served as Coordinator of Sisters in Manville, R.I. and in Easthampton. Towards the end of her long and successful career, she also was a school librarian and provided community service to the Sisters in her local convent.  She retired in 2001 and became an aide at St. Anne Convent in Marlborough.

Sister Elise was predeceased by her parents; her brothers, Joseph, Marcel, Paul and Olivier Rivest; and two sisters, Sr. M. Rose Agnes, SSA (Marie Rose Rivest) and Marie Ange Thouin. She leaves to grieve her sister, Cecile Rivest of Marlborough; many nieces and nephews; other extended family; and her religious family, the Sisters of St. Anne.

A funeral liturgy was held Feb. 12 at St. Anne Convent of Marlborough, with burial in Evergreen Cemetery. Funeral arrangements were under the direction of Fitzgerald & Collins Funeral Home of Marlborough (www.CollinsFuneral.com).

In lieu of flowers, a memorial contribution may be made to the Sisters of St. Anne Retirement Fund, 720 Boston Post Road East, Marlborough, MA 01752 or to a charity of your choice.