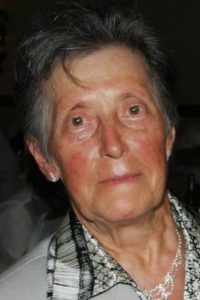 Marlborough – Ana (Reis) Andrade, 88, of Marlborough, formerly of Hudson, passed away peacefully Sunday, Feb. 11, 2018 at Shrewsbury Nursing and Skilled Rehabilitation Center, surrounded by her loving family. She is reunited in Heaven with her beloved husband of over 46 years, Jose C. Andrade.

Ana was born and raised on the Azorean Island of Santa Maria, the daughter of the late Manuel Figueiredo Reis and Ana Soares Moura. She married the love of her life, Jose Andrade, and together they immigrated to Hudson in 1966. They returned home to Santa, Maria, Azores in 1971, but returned permanently in 1978.

Ana worked as a machine operator for the Thomas Taylor Company in Hudson for many years before she retired. She was also a longtime member of Saint Michael Parish in Hudson.

Ana, a true matriarch, devoted her life to caring for family and she cherished her time with her children, grandchildren and great-grandchildren. She enjoyed playing cards, especially “Burro,” which she played with her entire family with her jar of pennies. Ana was also an avid gardener and she loved collecting dolls as well.