Westborough – The Westborough Veterans Advisory Board (WVAB) honored residents and former Marines William F. Carr, 89, and James A. Willwerth, 88, as their 2017 and 2018 Veterans of the Year, respectively, Feb. 6 in the Memorial Hall at Town Hall.

WVAB Secretary Ken Ferrera described Carr and Willwerth as “fixtures in the town” before presenting each with their awards in front of a crowd of about 75 people that included friends, family, fellow veterans, town selectmen, Town Manager Jim Malloy and State Representative Danielle Gregoire (D-Marlborough).

“I love you all, God bless and Semper Fi!” hollered Carr enthusiastically in front of the audience after receiving the award wearing his Marine Corps uniform.

In an interview after the ceremony Willwerth said, “The town recognizes their veterans and have many events and functions – and the parades.”

In 2011 he was grand marshal of Westborough’s 2011 Memorial Day Parade and last year rode with fellow veterans in the town’s 300th Anniversary Parade, which he said was “very exciting.”

Willwerth served as a 1st Lieutenant during the Korean War.

“After over three years of active duty and earning the National Defense Service Medal, Korean Service Medal and United Nations Service Medal, 1st Lieutenant James A. Willwerth was given an honorable discharge at the South Boston Navy Yard on Feb. 9, 1962,” said Ferrera at the ceremony.

Carr, who served as grand marshal of Westborough’s 300th Anniversary Parade, “enlisted in the Marines in 1946 from Athol High School and was sent to Parris Island for training. He moved quickly through the ranks, and in early 1948 embarked aboard the USS Fremont, heading for Vieques Island. After serving in the Caribbean and Atlantic, Bill was honorably discharged in September 1948 as a sergeant and qualified for the World War II Victory Medal,” said WVAB Chair Paul Horrigan before presenting Carr’s award.

At the age of 82, Carr, who is legally blind, earned a master’s degree in military history and in 2012 published the book “A Pact with the Devil: World War I Air Combat.” Today he volunteers at the Westborough Health Care Center and works out at the Westborough Tennis and Swim Club, among numerous other activities.

Active in recent years advocating for veterans, ghost writing a weekly newspaper column, supporting the Westborough Senior Center and producing a show on Westborough TV, Willwerth has also been “a driving force at the Westborough Country Club,” said Ferrera.

Willwerth also fondly calls himself a graduate of the Charlotte Klein Dance Center in Westborough after dropping off and picking up his granddaughter there for many years. That granddaughter, Anne, is now a third-generation student at Boston College.

The WVAB does not typically give two awards at one ceremony, said Ferrera before presenting Willwerth with his award.

“It’s unusual we do two in one year. We’re always a year behind, so you’re getting your award in the actual year. That’s a first,” said Ferrera with a smile. 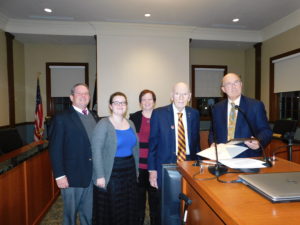 James A. Willwerth with members of his family and Westborough Veterans Advisory Board Secretary Ken Ferrera (r)