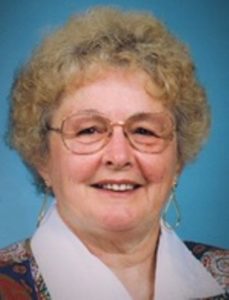 Northborough – Ivy A. (Holt) Murphy, 87, of Northborough, died Friday, March 9, 2018 in Beaumont Rehabilitation and Nursing Center in Northborough after an illness.

Ivy was born in Acushnet, daughter of the late Albert and Wanda (Pabis) Holt. She graduated from New Bedford High School and later attended Bridgewater State, where she received a diploma in Secretarial Studies.

Ivy met the man she would marry, Maurice G. Murphy, and later settled in Wareham where they started their family. She had worked as a secretary for the Wareham Public School System and spent many years at the Minot-Forest Elementary School before she retired in 1978.

Ivy enjoyed being surrounded by her family, but also loved going out and being able to play a round or golf or two with her friends. She also relished playing cards and cribbage, and enjoyed sewing, needlepoint and crocheting. She was at one time a very active member of Saint Peter’s Episcopal Church-on-the-Canal in Buzzard Bay where she was a founding member of the Thrift Shop there. Ivy was also a member the Order of the Redman, Pocahontas Council # 15.

Her husband of 49 years, Maurice G. “Trudge” Murphy, died in 2008. She leaves a daughter, Jerolyn and her husband Wayne of Shrewsbury; a son, Edward G. Murphy of Gardner; six grandchildren, Michael, Mathew, Amy, Shannon, Heather and Ryan; five great-grandchildren; and a sister, Alberta Gregory of South Dartmouth. Besides her husband, she was predeceased by a brother, Albert Holt.

Relatives and friends are invited to attend a memorial service Saturday, March 17, at 11 a.m., in St. Peter’s Episcopal Church-on-the-Canal, 165 Main St., Buzzards Bay. Burial will be held privately at a later date in the Massachusetts National Cemetery in Bourne.