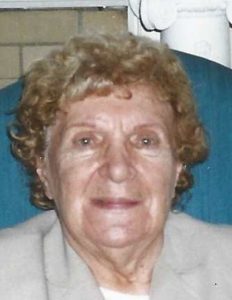 Marlborough – Sr. Anne Frances Juryak, (Sister Therese Couderc) died Sunday, March 25, 2018 at St. Patrick’s Manor after a long illness. She was 96 years of age and had been a Sister of the Good Shepherd for 66 years.

Sister Anne Frances was born in New York City, N.Y. in 1921, the daughter of Dominic and Antonetti (Vlacheneich) Juryak. She graduated from St. Agnes Academic High School in Astoria, N.Y. and after several years in the business world, she entered the Novitiate of the Sisters of the Good Shepherd in Peekskill, N.Y. in 1952 where she received her formal training in the ministry of the sisters. After receiving a Bachelor of Science degree from Fordham University in New York and a Master of Science degree in English Literature from St. John University in N.Y., Sister spent many years teaching at Mount Florence, Peekskill, N.Y.; Wickatunk, N.J.; Dix Hills, N.Y.; and Marlborough.

Sister was also an assistant Child Care supervisor in Springfield, a Child Care supervisor in Marlborough and worked in Child Care at Madonna Heights in Dix Hills, N.Y. After many years working with the students in our Good Shepherd residential programs throughout the Province, Sister Anne Frances retired in 2004.  In 2008 she was missioned to Good Shepherd Center in Marlborough and in 2011 Sister went to St. Patrick’s Manor in Framingham.

A Mass of Christian Burial was celebrated March 27 in the Holy Family Chapel in St. Patrick’s Manor of Framingham, with burial at Mt. Benedict Cemetery of West Roxbury. Funeral arrangements were under the direction of Fitzgerald & Collins Funeral Home of Marlborough.

Expressions of sympathy in honor of Sister Anne may be made to the Good Shepherd Retirement Fund, 420 Hemenway St., Suite 466, Marlborough, MA 01752.