Marlborough – Randy Fraser has played lacrosse for a half dozen teams and coached many more. For at least half of his 30-year career, however, and throughout often frenetic job changes, Fraser has called Marlborough home.

“I like the people and the community,” he said. “It’s been pretty uneventful living in Marlborough…I feel really blessed and lucky that I found this gem and establish some roots here.”

After informally playing backyard lacrosse with friends, Fraser began his lacrosse career as a high school freshman in Long Island.

After four years of playing the sport in high school, Fraser next moved to Springfield where he played competitive college lacrosse while studying at Springfield College.

“Once I went to college,” Fraser said, “that’s when I really focused on the sport.”

As Fraser found success in college lacrosse, however, his father, a successful lacrosse player himself, also excelled as a professional coach.

The pair reconnected within a matter of years when Fraser began playing for his father on the Boston Blazers professional indoor or “box” lacrosse team in 1991.

As Fraser played professionally and worked full time as a sales representative for Coca Cola, his search for a home landed him in Marlborough, a place that benefited both his personal life and his lacrosse life.

“I really liked the area,” he said. “There were things to do around Marlborough and then the proximity to all the highways to get back home to Long Island and to get to Boston, it was a really good fit for me.”

After the Blazers folded in 1997, Fraser spent time playing for two other professional indoor lacrosse teams as well as for Team USA at the 2003 World Games.

Around the same time, he began a coaching career that would eventually land him jobs at both college and professional levels.

He now enjoys his position coaching at Regis College in Weston.

“My pro career kind of kept me away from that because it’s really challenging to be a pro player and a college coach,” he said. “So I was finally blessed with that opportunity three years ago and that’s where I am today.”

Fraser has played indoors and outdoors. He has coached a multitude of levels of lacrosse. But as he enjoys his life two states away from where his lacrosse career began, Fraser’s love of the game and his love for his community combine in one of the jobs he quickly left.

“I coached the Boston Cannons for one summer,” he said. “The beauty of box lacrosse is it’s in the winter. I’m a huge surfer and I love the lake in Marlborough in the summer. So that summer of coaching field lacrosse was not for me. I was one and done with that.”

His career now three decades old, and with his spot at Regis College having him feeling happy, Marlborough’s Randy Fraser has no plans of slowing down.

“[Lacrosse] never ends,” he said. “You can play pretty much up until you’re 70 years old.” 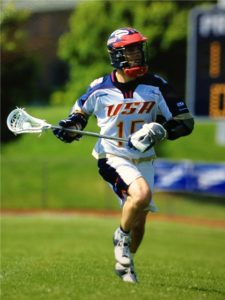