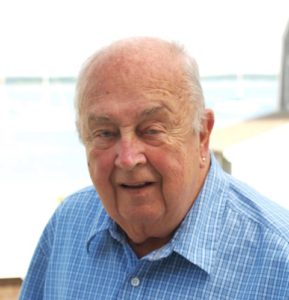 Westborough – Edward F. Callahan, of Westborough and Pocasset, died peacefully on Thursday, April 19, 2018 after a brief illness. He was 93 years of age and lived a very full life.

Raised in Brockton, he was the son of Edward and Mildred (Jarvis) Callahan. A graduate of Brockton High School, class of 43, he enlisted in the Army Air Force at age 18. As a lieutenant he was a WWII lead squadron navigator in the 15th Air Force, flying B-24 bombing missions out of southern Italy. It was there he began his love affair with Italy. He spoke fluent Italian, lived in Rome for a number of years with his wife Mary and her family, and continued to study and delight in all things Italian.

Ed was a graduate of Boston College (BA and MA) and received his PhD from the University of Wisconsin. He taught at the University of North Dakota before joining the faculty at the College of the Holy Cross in Worcester in 1957, where he retired from in 1990.

Ed was one of the first lay faculty at Holy Cross. He was most known for courses in Shakespeare, Irish Literature, Modern British Literature, Poetry, and Dante. He served as the chairman of the English Department and helped craft the Honors Program at the college. Ed also served as a member of The Danforth Foundation and lectured internationally on the works of James Joyce and Operas of Giuseppe Verdi.

After retirement from Holy Cross he continued to research and teach for many years, spending time at Carroll College in Helena, Mont., and with the Elder Hostel Program in Italy.

One of Ed’s greatest joys was a good (long) meal and conversation with family and friends including those made in Italy, Montana, and on Cape Cod. He most appreciated daily high tide swims and the combination of a very dry gin martini and a dozen oysters His last gifts of literature to his family were the writings of Evelyn Waugh, William Faulkner and the poetry of W.H. Auden.

His family wishes to thank his friends at Linden Ponds in Hingham, the staff at Sunrise of Wayland, and the supportive staff of Brookhaven Hospice for their care and kindness.

In lieu of flowers, donations in his memory may be made to the Nativity School of Worcester and also Girls, Inc. of Worcester.