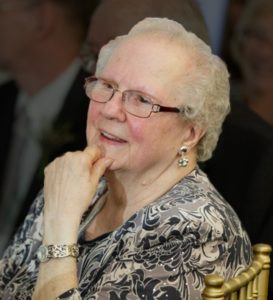 Westborough – Betty M. (Noponen) Lampi, 86, a long-time Westborough resident, passed away peacefully Friday, May 4, 2018 at the Rose Monahan Hospice Home in Worcester held in the loving embrace of her family.

Born Sept. 14, 1931 in the Greendale section of Worcester, she was the daughter of Thomas and Bertha L. (Alden) Noponen. She was educated in Worcester and was a graduate of Commerce High School.

In childhood, she spent many happy summers with her family at Beaman Pond near Baldwinville. It was there, in 1950, that she met “skinny lifeguard” Rauno Lampi of East Templeton. They were married a year later. After his military service in Saudi Arabia, they started their family in Amherst while Rauno completed his doctoral studies.

A dancer in her youth, Betty later taught dance throughout the Worcester area. During the summer of 1952 she served as Waterfront Director at a local Girl Scout camp.

In 1962 they moved their growing family to San Jose, Calif., where she continued to teach dance in the garage of their home and to serve as a Cub Scout den mother. They returned in 1967 and settled in Westborough.

For 27 years, Betty worked alongside her sister Esther at the Allen Nursery & Dance School on Forbes Street in Westborough. Multiple generations of Westborough families benefited from the nurturing care and education they received from Betty and Esther. Many residents will also remember large group dance classes the sisters taught to Westborough youth at the Armstrong school – advancing skills not only in ballroom dance but also in social etiquette and respect.

Betty and Rauno enjoyed much of their retirement from the vantage of their RV in which they crisscrossed the country several times before settling for a few years in Casa Grande, Ariz. In 2015, they returned to Westborough to be closer to family.

A memorial service will be held Saturday, May 19, at 10:30 a.m., in the First Congregational Church of Shrewsbury at 19 Church Road, Shrewsbury. Burial will be held privately at Pine Grove Cemetery.

In lieu of flowers, donations in Betty’s memory may be made to the American Diabetes Association at www.diabetes.org.

Funeral arrangements are under the care and direction of the Pickering & Son Westborough Funeral Home, 62 West Main St., Westborough.