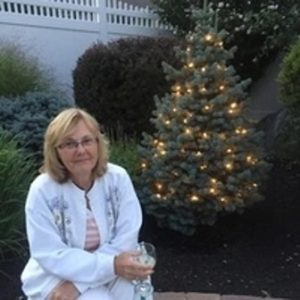 Donna is survived by her devoted husband of nearly 50 years, John “Jack” Caputo; a son, Jeffrey J. Caputo and his wife Alicia of Ormond Beach, Fla.; a daughter, Dawn Marie Mignault and her husband Bruce of Northbridge; two sisters, Cindy Jensen of South Dennis and Patricia Pepper of Worcester; five grandchildren, Hannah and John Mignault and Emmaline, James, and Lucas Caputo; and many nieces and nephews. She was predeceased by two brothers and a sister, Ralph and Ronald Olson, and Sheila Johanson.

Donna was born in Worcester, daughter of the late Raymond H. and Vivienne (Bonner) Olson, and grew up on “upper Burncoat.” She graduated from North High School, where she and Jack were in the same class. She later studied nursing at the David Hale Fanning School of Nursing in Worcester, and began her nursing career at the former City Hospital in the Medical Intensive Care Unit.

She later worked in the Medical ICU at Memorial Hospital before accepting a nursing position in private practice at Ob-Gyn Associates in Worcester. She culminated her career working as the Office Director for Dr. Stephen Maynard, Ob-Gyn, in Milford, before retiring in 2008.

Donna was a member of Saint Mary’s Church in Grafton and loved her flower gardens. Her neighbors often approached her for advice, so their gardens could be as beautiful as hers. She enjoyed bird watching and had an affinity for blue birds and “hummers” as she called the tiny hummingbirds. She enjoyed her time at the ocean and would spend hours searching for sea glass to add to her beautiful collection. She enjoyed music, traveling and local sports teams, and would often spend time watching the Red Sox and New England Patriots with Jack.

She loved her family and was so proud to be a doting grandmother and enjoyed watching their athletic events; even becoming a Northbridge High football fan, cheering on her grandson, while maintaining her devotion to her husband Jack, one of Grafton High’s Football coaches.

Calling hours for Donna will be held Sunday, June 24, from 3-6 p.m., in Mercadante Funeral Home & Chapel, 370 Plantation St., Worcester. Her funeral will be held Monday, June 25, departing the funeral home in procession at 10:15 a.m. for an 11 a.m. Mass at Saint Mary’s Church, 17 Waterville St., North Grafton. Interment will be in Fairview Cemetery of South Grafton.

Flowers may be sent or donations in her memory may be made to Saint Jude Children’s Research Hospital, 51 Saint Jude Way, Memphis, TN 38105 or by visiting www.stjude.org.