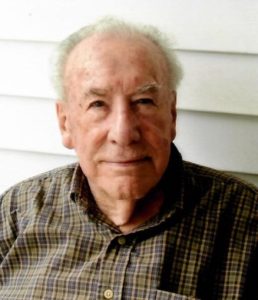 Westborough – Charles R. Hillier, 95, of Westborough, passed away peacefully at home July 2, 2018. He was the husband of the late Mary Joan (Howlett) Hillier.

Born in North Sydney, Nova Scotia, he was the son of the late Harold and Elizabeth (Hatcher) Hillier. He was educated in Quincy and was a graduate of Quincy High School. During WWII, he served with the U.S. Navy, attaining the rank of Electrician’s Mate First Class.

Charlie was employed as the Coordinator of Meter Reading for Systems at New England Power Service Company retiring in 1988.

He was past commander of the American Legion Post 401 in Weymouth and a member of the Rural Lodge of Masons in Quincy for over 70 years. He also enjoyed playing golf.

A graveside funeral service will be held Friday, July 6, at 10 a.m., in Pine Grove Cemetery, South Street, Westborough. There are no calling hours.