Shrewsbury – The Shrewsbury Police Department released this statement this evening: 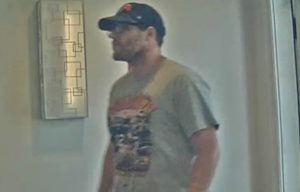 Shrewsbury Police responded to 200 Boston Turnpike (Rt. 9) TD Bank on July 7th, 2018 at 1:32 P.M. for a reported bank robbery. The lone suspect passed a note demanding money and the note also indicated no one would get hurt if they cooperated. The suspect then left the bank with an undetermined amount of cash that was placed in a Price Chopper bag. The suspect is described as a white male in his thirties, approximately six feet tall, 230 pounds, slight facial hair growth and wearing a blue Patriots hat. His clothing was a grey Patriots T-shirt (with Tom Brady on it), black sneakers with a white strip around the bottom and glasses. Photos are attached. The suspect fled the area on foot and Shrewsbury Police searched the area but he eluded the Police. If anyone has information or recognizes the individual please contact Detective Timothy Finacom of the Shrewsbury Police Detective Bureau. (508-841-8434). 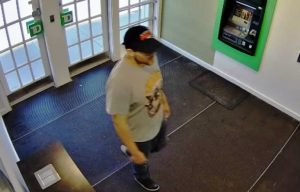