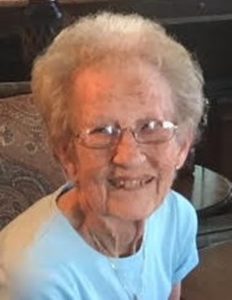 Hudson – June B. (Hoban) Perillo, 85, of Hudson, passed away peacefully July 6, 2018 at Marlborough Hospital, surrounded by her loving family. She is reunited with her beloved husband, John D. Perillo, who predeceased her in January 2000.

June was born April 10, 1933, a daughter of the late Philip F. Sr. and Hilda F. (Collins) Hoban. She graduated from high school in Hudson, where she was a lifelong resident.

June worked for many years at Hudson Savings Bank in the Mortgage Department and also at the August Bonnazoli Law Firm in Hudson as the Executive Legal Assistant.

June was an avid bird watcher and diehard Boston Red Sox fan. She loved to travel and visited many locations such as Hampton Beach, Lake Winnipesaukee, the Maine Coast, Aruba, Lake Tahoe, Hawaii, Disney and several other places. Most of all, June loved spending time with her family, especially her grandchildren.

June is survived by her three children, David J. Perillo and his wife Karen of Hyannis, Christine A. Regonini and her husband Robert of Lancaster, and Linda J. Smolenski and her husband Todd of Holden; her brother, Philip F. Hoban and Peggy, who was deceased in 2015, of Berlin; eight grandchildren, Janice Martin, Scott Perillo, Brian Perillo, Lisa Perillo, Jessica Auger, J.J. Smolenski, Shane Regonini and Kyle Smolenski; and seven great-grandchildren.

A period of visitation will be held Tuesday, July 10, from 11a.m. to 1 p.m., at Tighe Hamilton Regional Funeral Home, 50 Central St., Hudson, immediately followed by a funeral service at 1 p.m. in the funeral home. June will be interred beside her beloved husband, John D. Perillo, at Forestvale Cemetery in Hudson following the service at the funeral home.