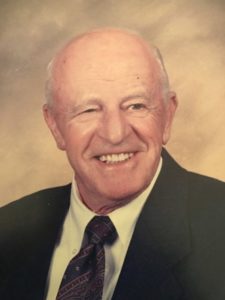 Westborough – Walter A Kinell Jr., 89, of Westborough, passed away July 23, 2018 at the Rose Monahan Hospice Care Home in Worcester.

Mr. Kinell was predeceased by his wife, Charlotte, to whom he was married until her passing in 1996. He leaves his son, Jeffrey and wife Susan of East Lyme, Conn., and his daughter, Jennifer Zocco and husband Tom of Shrewsbury. He also leaves six grandchildren, Matthew Kinell and his wife Michelina of Salem, Conn., Andrew Kinell and his wife Sophia of New York City, Curtis Williams of Grafton, Alyssa Kinell of Boston, Melissa Williams of Shrewsbury, and Jaclyn Williams of Shrewsbury. Additionally, he leaves two great-grandsons, Connor and Chase Kinell of Salem, Conn.

Mr. Kinell was a 1948 graduate of Commerce High School in Worcester. He also graduated from the Graduate School of Banking at Brown University in 1964.

He graduated from the Mass Military Academy in 1952 and served in and was honorably discharged from the U.S. Army in 1960 as a First Lieutenant. Mr. Kinell also served in the National Guard.

Mr. Kinell began his career as an “office boy” at Peoples’ Bank in Worcester and joined the Westborough Savings Bank as a Mortgage Administrator in 1959. He became Vice President/Treasurer in 1964 and was promoted to the position of President of Westborough Savings Bank in 1969, an office which he held until his retirement in 1994. Upon his retirement, he was elected as Trustee Emeritus of the bank.

Walter was actively involved in a variety of volunteer and community service positions in the town of Westborough. He served as the Chairman of the Planning Board, Treasurer of the 250th Anniversary Steering Committee, Chairman of the Zoning Revision Study Committee, Founding Member/Treasurer/President of the United Fund, President of the Rotary Club, Treasurer and Coach of the Little League, Treasurer of the William Curtis Library Fund and Trustee of the Forbes Boy Scout Fund. He also served on the Advisory Finance Committee and Board of Assessors. Finally, he served as a Trustee and Finance Committee Chairman of the Hillside School in Marlborough.

The family requests that in lieu of flowers, donations be made in his memory to Rose Monahan Hospice Home to support patient care at VNA Care, Fund Development, 199 Rosewood Dr., Suite 180, Danvers, MA or via www.vnacare.org.

A memorial service will be held Friday, July 27, at 11 a.m., at the Congregational Church of Westborough, 57 West Main St., Westborough. Burial in Pine Grove Cemetery will be private. There are no calling hours.