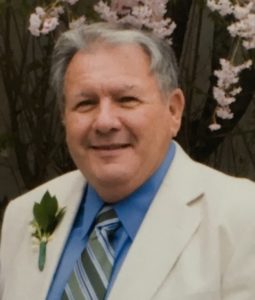 Westborough – Richard Ernest Samson, 82, of Westborough, passed away Aug. 7, 2018, surrounded by his loving family. He was the devoted husband of Ann Marie (Kilgarriff), to whom he was married for 60 memorable years.

Born in Northampton, he was the son of the late Ernest and Stella (Cartotto). He was educated in Northampton and received his degree from the Massachusetts College of Pharmacy in Boston and member of Kappa Psi Fraternity. He served with the Army National Guard Reserves.

He had a natural ability to connect with people and had an entrepreneurial spirit. He co-owned Three S Pharmacy and Livery Service in Lincoln and Westwood for 25 years. Most recently, he worked at CVS and Reliant Medical Group.

He was a member of St. Luke the Evangelist Church and a resident of Westborough for 19 years, previously raising his family in Framingham. He was a volunteer at St. Vincent Hospital, had his private pilot’s license, enjoyed country western dancing, and spent summers in Hampton Beach, N.H. and winters in Bonita Springs, Fla. He will be remembered for his quick wit, the sparkle in his eye and his ability to make people smile.

In addition to his wife, Ann, he is survived by his four children, Gail Ann Giffen and her husband Shawn of Townsend, Maryjane Stenslie and her husband Craig of Durham, N.H., Dr. Richard Thomas Samson and his wife Susan of Waterville, Maine, and Patricia Margaret Alden and her husband Bryant of Conway, N.H.; one brother, Jeffrey Samson and his wife Joy of Rockland, Maine; and nine grandchildren, Anthony Giffen, Max Stenslie, Mikaila Horan, Christopher Samson, Eric Samson, Thomas Samson, Amy Samson, Amelya Saras and Claire Alden, along with nieces and nephews.

In lieu of flowers, donations in his memory may be made to the American Heart Association.