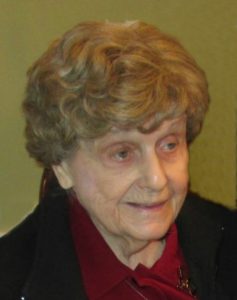 Shrewsbury/Eastham – Frances M. (Zajac) Ostrosky, 91, of Shrewsbury and Eastham, passed away peacefully Aug. 28, 2018 at the Beaumont Rehabilitation and Skilled Nursing Center in Northborough. She was predeceased by her husband of 48 years, John M. Ostrosky.

Frances was born in Greenwich, Conn., the daughter of the late John and Mary (Poltorak) Zajac. After the death of her father, her mother and family settled in Stamford, Connecticut where Frances’ mother met and married the late Joseph Bankowski.

Frances was a graduate of Stamford High School and worked as a secretary until the birth of her sons after which she devoted her time to her children.

In 1961, Frances and her family relocated to Shrewsbury. She was a volunteer at St. Anne’s Thrift Store in Shrewsbury until the age of 87 where she always greeted her fellow volunteers and customers with a smile and was also an active member of Saint Mary’s Women’s Guild for many years.

Spending time at her vacation home on Cape Cod clamming, cooking for family and friends, and searching for treasures at the Wellfleet Flea Market were her favorite pastimes.

Since 2016, Frances resided at Whitney Place Assisted Living in Northborough where the care and companionship from staff and residents greatly enhanced her life.

Frances leaves behind her two sons, John J. Ostrosky and his wife Susan of Shrewsbury and Robert M. Ostrosky and his wife Carol of Northborough; sister Emily Kurpiel of Stamford, Conn.; six grandchildren, John Jr., Jay, Jeffrey, Bryan, Mark, and Joanna Ostrosky; four great-grandchildren, Jack, Harrison, William, and Alyssa Ostrosky; and many nieces and nephews. She was predeceased by her stepbrother, Edward Bankowski.

Relatives and friends are invited to attend a funeral Mass celebrating Frances’ life Wednesday, Sept. 5, at 11 a.m., in Saint Mary’s Church, 640 Main St., Shrewsbury, under the direction of the Britton-Shrewsbury Funeral Home. Burial will take place privately at a later date in the Massachusetts National Cemetery of Bourne.

In lieu of flowers, the family requests that you consider a donation in her memory be made to St. Anne’s Human Services, 130 Boston Tpke., Shrewsbury, MA 01545.