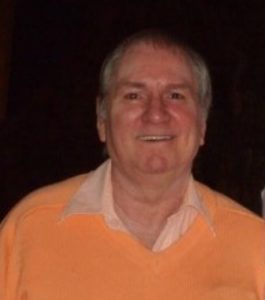 Marlborough – David Ricky McGrath, 73, passed peacefully in his sleep Sept. 9, 2018, which would have been his mother’s birthday, in Marlborough.

David is survived by his wife of 35 years, Edythe McGrath; his children, Lyssa McGrath, Shaun McGrath and his fiancé Ana Fernandes of Marlborough, and his oldest daughter, Terese Leger and her husband William (Bill) Leger, and David’s only grandson, William “Billy” Leger Jr., all of Framingham; his sister, Diana Rigoli, her husband Richard Rigoli and their two children Adam Rigoli and Ashley Rigoli; and his sister-in-law, Diane Johnson, and his father-in-law, Freeman Johnson, both of Centerville, as well as many other loved ones. He was preceded in death by his mother and father, David Patrick McGrath and Rita Terry McGrath.

David was born March 21, 1945, and spent his life celebrating the good times with a bright smile and a cheerful hello for all those he met.

He was an avid sports fan of all Boston teams, and rarely missed watching a game on TV or a chance to collect various types of memorabilia. He enjoyed reading the newspaper, staying up to date with politics, being a culinary critique for new family recipes and the chance to tinker with technology. His family and friends will always remember him as a joyous, thoughtful and caring person.

In lieu of flowers, gifts may be made in memory of David Ricky McGrath to support cancer research and patient care at Dana-Farber Cancer Institute, P.O. Box 849168, Boston, MA 02284 or via www.jimmyfund.org/gift.