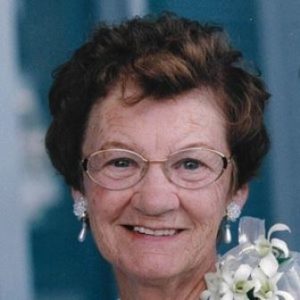 Born in Spencer, she was the daughter of the late Clair and Florence (Guhin) Aucoin and wife of the late Donald Everett Kinney, who died in 2003.

Following in her parents’ footsteps who were singers and dancers in Vaudeville, Marie took tap dancing lessons and performed at the Grafton Street High School and the Warner Theater in Worcester.

Marie met her husband Donald during World War II and the two were married in 1945, living near Camp Pendleton on the Pacific Coast before moving to Worcester in 1952.

She enjoyed baking, with her specialties being pies, cakes and coffee rings while using her sewing talent to sew gowns and skating costumes for her daughters.

Throughout her life, Marie loved to travel with her daughter, Tracy, visiting England, France, Dubai, Turkey, Ireland, and Brussels to name a few of the places they visited.

She is survived by her daughter, Jeanne Carter of Marlborough; her son, Stephen Kinney and his wife Elizabeth of Randolph, Vt.; her daughters, Linda Kinney and her husband Joseph Browning of Winchendon and Tracy Kinney and her husband John Corio of Las Vegas, Nev.; and her sister, Adele Haynes of Shrewsbury. She is also survived by five grandchildren and 12 great-grandchildren. Marie was also the sister of the late Eugene Aucoin, Marcel Aucoin and Madeline Peloquin and the mother-in-law of the late Paul K. Carter.

She will be remembered as the best dressed lady at the Meadows.

In lieu of flowers, donations may be made to Alzheimer’s Association, 309 Waverley Oakes Rd., Waltham, MA 02452.