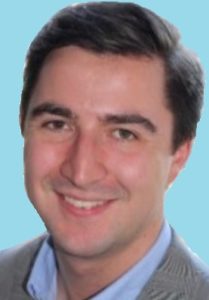 Westborough – Mark A. Ritchey, 25, passed away unexpectedly Oct. 7, 2018 at the UMass Memorial Hospital in Worcester.

Born in Framingham, he is the son of Michelle M. Marinelli of Westborough and Douglas M. Ritchey of Mystic, Conn.

Mark was raised and educated in Westborough and was a 2011 graduate of the Westborough High School. He attended and graduated from Bryant University earning a Bachelor’s Degree in International Business and Management.
Mark was a successful Commercial Real Estate Analyst.

He was an accomplished golfer and while in high school he was captain of the Westborough Rangers Golf Team. While at Bryant University, he founded the first College Golf Club. During his summers, Mark was a highly respected and requested A class caddy for many years on Cape Cod.

In addition to his parents, he is survived by two brothers, Dante Ritchey and Max Ritchey, both of Westborough; his paternal grandparents, Ward and Evelyn Ritchey of Mumford Cove, Conn.; his uncle, Dan Marinelli along with his wife Carolyn and their daughter Stephanie; his girlfriend, Brianna Haberle of New York; and a great-aunt, Peg Marinelli and her significant other, Bernie Schlichte. His maternal grandparents, Dante and Dorothy Marinelli, predeceased Mark.

His funeral Mass will be celebrated Monday, Oct. 15, at 10:30 a.m., in St. Luke the Evangelist Church, 70 West Main St., Westborough. Interment will be private. There are no calling hours.

Please omit flowers. Donations in Mark’s memory may be made to HELPGUIDE.org. or to the Francis Ouimet Scholarship Fund, 300 Arnold Palmer Blvd., Norton, MA 02766 or at Ouimet.org.