The event is free and open to the public. It is a program of the Worcester JCC Author Series, made possible by a grant from the Jewish Federation of Central Mass. Co-sponsors include the Congregation B’nai Shalom Sisterhood, Beth Tikvah Synagogue, and Haddassah Greater Boroughs Chapter.

Nancy Greenberg, Cultural Arts/Senior Director at the Worcester JCC said, “This is the first German-Jewish cookbook in a century.  It’s a mix of history, memoir and recipes. It is a very important contribution in terms of documenting the culinary and cultural history of the Jews of Germany prior to WWII, and then the vibrant émigré community of NYC in the 1940s and 50s. This cooking demo and talk will be a discovery, even for those familiar with more typical Eastern European/American Jewish food.”

Gaby — the mom — was born in Germany and immigrated when she was a year old to the U.S in 1939. She grew up in New York City’s Washington Heights, which at time, had a large German-Jewish population. She now lives in Medford. Gaby is a sculptor who has also spent many years working as a mediator.

Sonya — the daughter — is a visual artist and coordinator of Farm Spot, her local CSA (community supported agriculture) who lives in New York City. Her blog, eat+art+word, brings together her visual arts and culinary interests.

“My mother and I have our own personal answers for why we wrote our book. I’ve always had a deep interest in all things food-related, and always had a secret desire to write a cookbook. For my mom, she has a long-held interest in her family history as it related to the Nazis. One set of her grandparents didn’t make it,” said Sonya.

“The book came together when we realized there were no cookbooks about German Jewish food in print,” she added. “We needed to share our family’s recipes. Our traditions and the culture of food were vanishing.”

“This was a huge project, which took seven or eight years. We travelled back and forth. We did a few residencies at various family friend’s homes for a week at a time, and tested many recipes together. About half of the recipes were family recipes. We kept the recipes as genuine as possible,” she said.

For more information about the book, visit germanjewishcuisine.com.

CBS is located at 117 East Main Street in Westborough. To RSVP, which is appreciated but not required, email [email protected]. 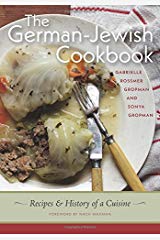