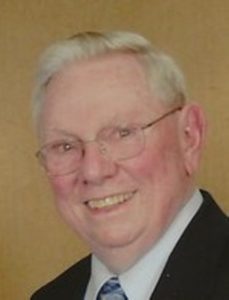 Shrewsbury/Worcester – Any one of Norman Rockwell’s portraits of “The Doctor” might accurately capture in picture the type of medicine and doctor that was John Donovan. His name is synonymous with pediatric medicine in the Town of Shrewsbury, as well as the City of Worcester.

Dr. Donovan’s practice began in 1962 and for over 34 years he dedicated his professional career to the many families in town and beyond. In his familiar and comfortable offices on Julio Drive he was able to distract or amuse his patients while curing what ailed them. Physical exams, vaccinations, and information about health, safety, nutrition, growth and development…he covered it all. Often it might not have been a prescription that healed them but rather just a good conversation with a well-respected doctor who knew firsthand about parenting and health. He was good medicine in every sense of the word.

His life was based upon the three virtues of faith, hope and love. These simple virtues guided and sustained him throughout his long life. John Henry Donovan Jr. died peacefully after a period of failing health at his home at Westbrook Crossing on Nov. 7. He was 91.

Born April 24, 1927 to the late John H. and Dorothea (Morse) Donovan, he was raised in Marlborough and he attended Immaculate Conception Grammar School. His Catholic education continued at Saint John’s High School where he graduated as valedictorian with the class of 1944.

John discerned a vocation to the priesthood and received his Bachelor’s degree in Philosophy from St. John’s Seminary in Brighton in 1950. After thoughtful consideration, he made the decision to leave the seminary and joined the United States Air Force, graduating from Officer Candidates School with distinction. He honorably served his country in the Korean War as a training officer at Lackland Air Force Base in San Antonio, Texas. After his discharge from the Air Force, John realized his true vocation to medicine and studied sciences at Boston College for two years, later graduating from Tufts University School of Medicine in 1959.

In 1953, John met the love of his life, Eleanor Ann “Ellie” Collins, head nurse at Marlborough Hospital Nursery Department, at a mutual friend’s wedding. They married in the Saint Michael’s Church in Hudson on June 9, 1956. Not only was she his wife and best friend for 62 years, but his office nurse working side by side at their practice on Julio Drive. They enjoyed retirement in 1996 and John then worked for two years with Child Health Associates.

He was a charter member of the Irish and American Pediatric Society, Pediatric Consultant at Yours for Children Association, recipient of the St. Luke’s Society Award for outstanding service to his church and regional pediatric community, a faithful parishioner, and a daily communicant of Saint Mary’s Church where he served as Eucharistic minister and lector.

He raised his large Irish Catholic family on Bryant Avenue in Shrewsbury. Family and friends meant the world to him. The doors were always open and their house was the center of any family get together. He loved time by the pool, cookouts, vacations to the Cape and Nantucket or an annual visit to Saratoga Race Track with his fellow physicians and their families.

When not at work he loved a fishing expedition with his sons on his boat off Cape Cod where they would routinely deplete the waters of its striped bass and bluefish. His personal best was a 38 lb. striped bass but there were many days his boat was filled with more than enough fish to give to family and friends to enjoy. John loved a Red Sox game at Fenway or a Bruins game at The Garden or either on television.

John and Ellie and the entire Donovan and Samia families suffered an immeasurable loss on April 5, 2010 when their youngest child, Ellen, died after a valiant battle with cancer at age 39. John’s faith sustained him and assured him that Ellen was at peace and in heaven and that one day they would be reunited, along with Ellen’s daughter, Therese Rose.

Family and friends will honor and remember John’s life by gathering for calling hours Sunday, Nov. 11, from 2-6 p.m., in The Britton-Shrewsbury Funeral Home, 648 Main Street, Shrewsbury. His funeral Mass will be celebrated Monday, Nov. 12, at 10 a.m., in Saint Mary’s Church, 640 Main St. Burial with military honors will follow in Mountain View Cemetery.

John’s family would like to express their special thanks to Mary Traina from Right At Home for her special care, help and support, and Giselle from the VNA Hospice and Palliative Care.