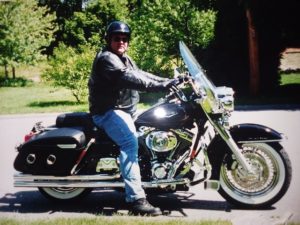 Leominster – Ronald Joseph Edwardsen Jr., 62, of Leominster, died Nov. 2, 2018 in his home, surrounded by close family members. He was the beloved husband of  Anita-Marie (Wiedergott) Edwardsen for the past 35 years, and the son of the late Barbara M. (O’Toole) and Ronald J. Edwardsen Sr.

Ron was a graduate of Maynard High School, class of 1974. Following graduation, he joined the Army where he was an Airborne Green Beret with the 10th Special Forces Unit.

After proudly serving his country he worked for Digital Equipment Corporation as a technician and later as a security guard. After 10 years at Digital, deciding to make a career change, Ron opened up his own painting business and was the owner and operator of Neighborhood Painting.

Ron loved spending time with his family and their dogs, riding his Harley, snowmobiling in Maine, and helping others wherever and whenever needed.

In addition to his wife, Anita-Marie, he is survived by their daughters, Kristine (Edwardsen) Hart and her husband Travis and Kelly Edwardsen. He is also survived and will be deeply missed by many extended family members.

A private ceremony was held at St. Anne Church in Southborough.

Arrangements were under the care of the Morris Funeral Home, 40 Main St., Southborough.

To leave words of condolence to the family, visit www.morrisSouthboroughfuneral.com.