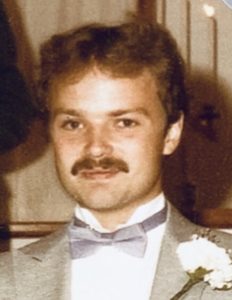 Bill was born July 25, 1961 in Boston. Bill’s parents were Karl Pulsifer and Joan Marie Pulsifer. Bill grew up in Northborough, where he graduated from Algonquin Regional High School in 1979.

Bill was a member of the Algonquin Regional High School wrestling team where he excelled in the sport of wrestling. Also during high school, he earned the highest level of distinction at the rank of Eagle Scout, in the Boy Scouts of America. Only 4 percent of Boy Scouts are granted this rank after a very lengthy review process of their hard work, dedication, and achievements.

On the happiest day of his life, Bill married Lisa Marie Roy Aug. 25, 1984 in Northborough.

In 1991, Bill graduated from the University of South Florida (USF) in Tampa, Fla. with a Bachelor’s of Science degree in Electrical Engineering, while working full-time and caring for his wife and daughter.

Bill worked as an electrical engineer for several companies through his lifetime, such as Honeywell in Largo, Fla. and Jabil in St. Petersburg, Fla.

However, his most honorable achievement was balancing school, work, and taking care of his wife and daughter Kasie Marie Pulsifer Jordan until he made the selfless decision to put his career on the back burner and dedicate the remainder of his life to taking care of his beautiful wife, Lisa Marie Roy Pulsifer, after her diagnosis with Multiple Sclerosis (MS) in 1987. Bill stood firmly by her side and served as her husband, best friend, and her caregiver during her 29 year battle with MS. They were happily married for 32 years until Lisa went home to be with the Lord in 2016, at the age of 51 years old.

In 2017, Bill moved to Germantown, Tenn. to be near his only daughter, Kasie Marie Pulsifer Jordan, her husband Mark Jordan, and their newborn baby, his granddaughter, Madison Marie Jordan.

During Bill’s life here on earth, he enjoyed being with his family, gardening, visiting with people he loved, fishing, helping others, sports, and he loved his New England Patriots. Go Pats!

Everyone that knew Bill will agree that he was very humble, generous, selfless, faithful, gentle, giving, forgiving, kind, loving, funny, intelligent, and that he loved his new role as a grandfather! His love and dedication to his wife, Lisa, are a true testament to his character and the fact that he set a perfect example, for all of us, of what true love is.

Bill was a truly amazing man who had a lifetime of accomplishments and it gives the family great peace to know that as a Christian he is reunited in heaven with his wife where there is no sadness, no illness, no suffering, and that one day as Christians we shall all be reunited as promised in the Holy Bible.

Bill was preceded in death by his wife, Lisa Marie Roy Pulsifer; his father, Karl Pulsifer; and his mother, Joan Pulsifer.

Bill is survived by his daughter and her husband, Kasie and Mark Jordan; his sisters, Patricia Pulsifer, Laura Belliveau, and Diana Pulsifer; his nephews, Steven Pulsifer, David Pulsifer, Cotey Belliveau, and John Maclellan; his nieces Meghan Maclellan and Sandra Hurd; his granddaughter Madison Marie Jordan; and other relatives.

A graveside memorial service and burial will be held Tuesday, Jan. 8, at 12 p.m., at Howard Street Cemetery, 50 Howard St., Northborough.

Flowers may be sent to Fitzgerald and Collins Funeral Home, 378 Lincoln St., Marlborough, by 7 p.m. on Jan. 7, or memorial donations can be made in his honor to the National Multiple Sclerosis Society at www.nationalmssociety.org. Condolences may be left on William “Bill” Pulsifer’s guest book at www.collinsfuneral.com/notices/William-Pulsifer.

John 3:16 For God so loved the world that he gave his one and only Son, that whoever believes in him shall not perish but have eternal life.