Hudson – When retired Hudson Fire Chief Tom Garrity and several other retired Hudson firefighters walked the local cemeteries last spring to place flags on gravesites, he noticed many of the memorial markers were in bad shape after years of exposure. He took four home and contacted Mark Hollick, the principal at Assabet Valley Regional Technical High School.

“I knew those kids could sandblast the metal,” he said. “Mark is a call firefighter, and his father, Bill Hollick, was the chief here from 1978-88. I knew Mark would want to get involved.

“Our deceased firefighters deserve recognition and honor, and these memorial flag standards serve as reminders everyday of their service,” he added.

After students in Assabet’s Auto Collision program sandblasted them, Garrity painstakingly hand-painted the raised designs. Satisfied with the result, he collected 20 more of the most worn markers and gave them to the school. Hollick noticed that some didn’t have the holder for the Hudson Fire Department flag on the back, so he turned to another program, the Metal Fabrication group.

“They said it would be no problem to weld some aluminum tube to the back that would hold the flagstick, and they also replaced the threaded rod with a more decorative rod,” said Hollick. Purely by the luck of the draw, the student assigned to the task of welding the flag holders, Robert Starkey from Boylston, had a personal interest in the project.

“It just happened that I had finished my assignment and was ready for a new project. My dad has been a firefighter for over 10 years in Smithfield, R.I.,” Starkey explained. “This project meant a lot to me, knowing that it was to recognize firefighters who had passed on. I want to be a firefighter, too, so my heart was really in it.”

From Metal Fabrication, the basket of markers moved to Auto Collision. Kenny Stukonis, lead instructor in that program, explained that first they went over the engraving on the back and made a spreadsheet so that they know for sure that each marker will be returned to the right place. Then they sandblasted them and hit them with a base coat.

“We can match any paint, so we will go ahead and do the red color that is already chosen, and then cover it with a clear coat,” he said. “That way, as they are being hand-painted, any mistakes can be easily wiped off while wet.”

The Hudson Firefighters Relief Association (HFRA) had provided the memorial markers for gravesites, but the group had become relatively inactive over the last few years. Garrity and a few other retirees plan to remedy that situation.

“The Marlborough Foundry poured the original markers, but we have the mold,” he noted. “We plan to order more for the recently deceased and to have them on hand. We also want to make sure death benefits have been paid.”

The HFRA is planning a fundraiser Sunday, Feb. 3, at Stevie’s Back Road Café, 577 Main St., Hudson. Hudson firefighters will be serving food, and the restaurant will donate a portion of all proceeds to the HFRA. 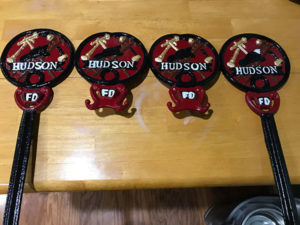