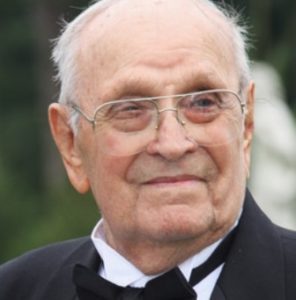 Louis grew up in Millbury, the youngest child in a family of builders, artists, entrepreneurs, and immigrants. The Heck family had a tradition of coming together with friends to build each other’s homes by hand, and in 1953, in the footsteps of his father Joseph (Julius) and mother Elizabeth, Louis made his own home in Shrewsbury, with the help of family and friends.

He lived at the cherished bungalow on Edgemere Boulevard for over six decades with his beloved wife of over seventy years, Pearl. Pearl predeceased him in 2011, but she remains in his heart forever.

For decades, Louis and Pearl were a weekly fixture at the local dancehalls. Louis loved music and Pearl loved Lou, so later in life he convinced her to join him as two-thirds of the infamous Ragg Mopps jazz trio. Lou played trumpet, Pearl played drums, and their son Bob played keyboard.

Professionally, Louis was a welder, fabricator, and armchair engineer. He graduated from Millbury High in 1936 and became famous for his from-the-hip teenage inventions, including a diving bell made from a metal tank and an iceboat fashioned with the engine of a crashed airplane. He almost crashed the iceboat in a race on Lake Quinsigamond in 1935, nearly precipitating a first obituary. Instead, he made it to 101, and his grateful children and grandchildren were born and are able to share this story.

Louis worked at US Steel in Worcester and Machinery Electrification in Northborough, before becoming Lead Fabricator at Morgan Construction Company in Worcester, where he worked for 25 years. Louis estimated that he created dozens of designs that were ultimately patented, uncredited. He was never interested in the credit; he simply enjoyed making things work.

As a boy in the shadow of the Great Depression, he worked under his father as a carnival barker and ride operator at the long forgotten White City Amusement Park. He was able to recite the White City carnival script until nearly the day he died. He mowed his own lawn until the age of 99, and always swore by peppermint candies and Entenmann’s cake. Despite his vast creativity, he rarely wore anything bolder than slacks, and told the same jokes for nearly ten decades to what Dorothy Parker would have called “scattered success.”

Lou left a mark on all he met, and many that he didn’t. His metal creations whir and buzz in machines everywhere, as unnoticed and high-functioning as the man who designed them. His family misses him greatly. And to all the ladies at Big Y at Southwest cutoff who for decades couldn’t believe he was a day over 80, big Lou blows you a final kiss.

All are welcome to gather with Lou’s family and friends Tuesday, Feb. 12, from 10 a.m. to noon, at Roney Funeral Home, 152 Worcester St., North Grafton. Burial will follow at St. Joseph Cemetery in Leicester.