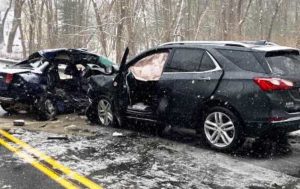 Westborough – The Westborough Police Department released this statement and photos this afternoon regarding an accident that claimed the life of a Westborough man March 2  on Nourse Street. Police identified the man as Timothy Roth of Westborough.

On March 2, at 9:53 a.m. The Westborough Police and Fire Department were dispatched to the area of 18 Nourse Street for a serious motor vehicle crash.

Sergeant Clifford Luce and Officer Dave Holt were the first officers on the scene and observed a two vehicle crash with one occupant trapped.

One of the operators in the crash was Tracey Lowney of Saugus and she was driving a gray 2019 Chevrolet Equinox. There was heavy front end damage to her vehicle. Ms. Lowney was transported by Westborough Fire Department Paramedics to Umass Memorial (University Campus) with non-life threatening injuries.

The operator of the second vehicle was extricated by firefighters using hydraulic tools. This driver was also transported by Westborough Paramedics to Umass Memorial with life-threatening injuries. He was later pronounced deceased.

Sergeant Luce is the investigating officer in the accident. He was assisted by members of the CEMLEC Accident Reconstruction Team, from the towns of Boxborough, Shrewsbury, and Webster. 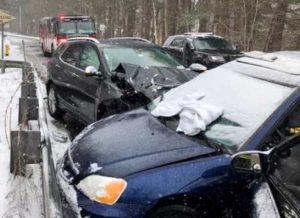