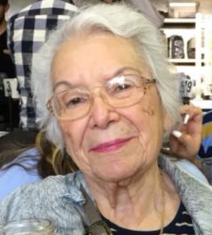 Hudson – Elva Guadalupe (Munoz) McClure, 87, of Hudson, passed away peacefully, surrounded by her family, March 3, 2019 at UMass Medical Center after a brief period of declining health. She is reunited in Heaven with her beloved husband of over 58 years, Everett G. McClure, who predeceased her in 2014.

Elva was born Jan. 7, 1932 in Mercedes, Texas, a daughter of the late Manuel and Teresa (Cano) Munoz. She was raised in Weslaco, Texas, where she graduated from Weslaco High School in 1952. Elva moved to Massachusetts in 1956, shortly after marrying the love of her life, Everett, and together they settled in Hudson, where they raised their four children.

For many years Elva was a stay at home mom, dedicated to raising her kids. Later, she had a successful career as an office manager and administrative assistant, eventually retiring from Raytheon Company. She a was a former member of Christ the King Church in Hudson.

Elva was an active member of the Hudson Senior Center, where she seldom missed a Friday music session with her many dear friends. She also enjoyed traveling, shopping and eating out. She especially enjoyed gardening and had an incredible green thumb and a way with roses. Most of all, Elva loved spending time with her family, whom she cherished, and her wise advice will be greatly missed by her grandchildren.

Services for Elva will be scheduled at a later date in Texas. Tighe Hamilton Regional Funeral Home is honored to be assisting with her arrangements.