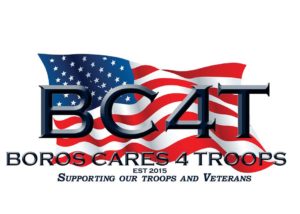 Northborough – On the homepage for the Boros Cares 4 Troops website, it says “Sometimes the smallest act of kindness has the biggest impact on someone’s day!”

That is a mission that members of the nonprofit volunteer group strive to accomplish in various ways throughout the year.

The organization, BC4T, as it is known, was started by four Northborough women, Leslie Arsenault, Karen Brewster, Beth Davison, and Michelle Gillespie, as a way to show support for deployed troops and veterans here at home.

The group’s first mission was to create care packages for deployed troops. They have also held a number of events to raise awareness for their efforts including raising funds for a scholarship, hosting road races and cornhole tournaments, participating in the town’s annual parades and festivals, hosting social events such as veterans meet & greets, and fundraiser partnerships with local restaurants.

Each Friday on its Facebook page the group asks followers to participate in RED FRIDAY. The initiative began in 2005 by military supporters who wanted to show support for the service members who protect our freedoms and way of life around the world. More specifically, it is for service members deployed as RED stands for “(R )emember (E )veryone (D)eployed”. Hence, supporters wear the color red on Fridays.

BC4T also reaches out often to local veterans to show their support. This past Valentine’s Day, the group sent personalized cards that also contained a gift card to a local business as a way to thank the veteran for their service. They also on occasion, if they can, support individual needs and requests.

“We just really want to expand our random acts of kindness, in the hopes that other will follow,” Gillespie noted. “What they did for us was so important – we just want to acknowledge that.”

One local veteran, William Griffin, who served in the Korean conflict, noted how happy he was to receive the unexpected Valentine’s Day card from the group.

“I was very excited but also felt like I didn’t deserve it, because it was an honor to serve my country and I know how fortunate I was to come home okay. So many others didn’t,” he said. “But I am grateful for this kindness – it means a lot.”

As the former director of the Central Massachusetts Veterans District, Adam Costello knows BC4T well. An U.S. Army veteran, he now is the veterans coordinator for Easter Seals Massachusetts.

“Boros Cares 4 Troops is an excellent group of volunteers who are constantly doing great things in the community,” he said. “These random acts of kindness have a larger positive impact on the community than most people realize.  They are what makes us a community, rather than a group of people who just happen to live close to one another.”

For more information on how you can support BC4T, visit www.bc4t.org or its Facebook page Boros Cares 4 Troops.