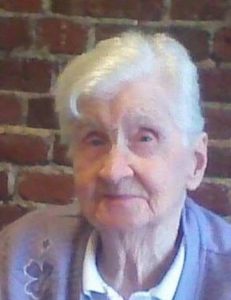 She was born in New Bedford, the daughter of the late Paul and Eva (Durosher) Bouchard, and lived in many places, including New Bedford, Florida, Connecticut and Marlborough. She was predeceased by her son, William of Manchester, Conn.

Mrs. Vincent was a homemaker, nurse’s aide and the private secretary to a vice president at Travelers Insurance Co.

She was involved as a den mother and girl scout leader. She is best known for her love of needlepoint and crochet. She loved visiting with her family and seeing her great-grandchildren.

Family funeral arrangements will be held at a later date.