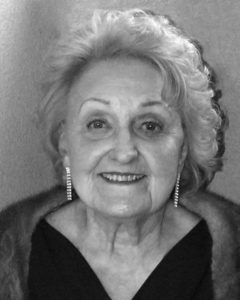 Hudson – Regina V. Maselli-Northrup, 92, of Hudson, a former editor and technical writer at Raytheon Company, died of respiratory failure due to pneumonia April 14, 2019 in the Hospice Care of Marlborough Hospital.

Ms. Northrup was with Raytheon for 14 years until she retired. Her editing expertise made her invaluable and incomparable. Regina was a perfect example of an executive secretary, from her glamorous appearance to her attention to detail. She worked for Perini Corporation during the construction of the Prudential Center in Boston, RCA, Fenwal, Atlanta Regional Commission in Georgia, and during her early years, at NASA in Langely, Va., and later at its headquarters in Washington, D.C.

The fifth and last child of Lithuanian immigrants Alexander and Konstancya Venckunas, she was born in Brooklyn, N.Y. on Aug. 27, 1926, and her family moved shortly thereafter to Hampton, Va., with sister Edna starting their life together.

Regina played the violin for two years in the school orchestra and graduated in 1943 from Hampton High.

While working for NASA she met and married a handsome naval officer, Leo J. Maselli of Framingham, and they settled in Southborough for more than 20 years. During that time Regina was an active member of Saint Anne’s Parish and sang in their choir.

While part of the Catholic Women’s Club, she participated in all of its theatrical productions. Traveling extensively with the Saint Anne/Saint Michael’s Travel Club, Hudson Savings Bank Golden Age Club, and the Happy Wanderers, her favorite destination was Italy. Reggie enjoyed interior decorating, yoga, dancing, reading, and fashion. She started four generations of fashion enthusiasts and will always be remembered for her sweet smells and youthful beauty.

In 1972 she married Clint Northrup and moved to Atlanta, Ga., she later returned to Massachusetts in 1978 where she met her best friend Jean Juliano while working at Raytheon. Jean devoted the last several years to helping Regina, enabling her to enjoy an active life while declining health took over.

For many years after retirement, Reggie was an active member of the Board of Trustees for the Whispering Pines Condominums of Hudson.

She is survived by her long-time friend and housemate of 40 years, Jean Juliano of Waltham; her daughter, Lisa Marlana Maselli of Northborough; her granddaughter, Ryan Amanda Maselli of Nashua, N.H.; grandson Jeffrey Paul Maselli of Marlborough; granddaughter Leigh Ann Andonian and her husband John of Leominster; great-granddaughter Isabella Cora Andonian; and great-grandsons Gage Joseph Andonian and Brooks Alexander Turner of Nashua, N.H. She was predeceased by both husbands and her son, Leo J. Maselli II (Buzz) of Daytona Beach, Fla. The loss of her son was met with great enduring sorrow.

She was known to her family and friends as Regina, Reggie, Jean, “the Queen” or Nonie. As the last of her generation, her surviving nieces and nephews, Ilene, Ann, Johnny and Charlene, Nina, Kathy, Heide and Stella, Suzanne and David, will remember Aunt Jean with adoration.

Mom, Nonie or Regina, you will remain in our hearts and feel our love for you each and every day. Let’s raise a glass to a self-made woman and toast to carrying on the legacy she began.

Her celebration of life will be hosted at the Southborough Community House, 28 Main St., on Saturday, May 4, from 1 – 5 p.m.