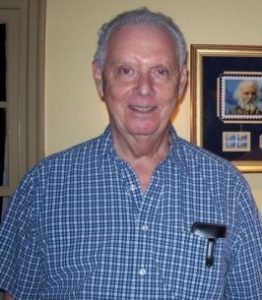 Northborough – Charles William Longfellow, 87, affectionately known as Charlie by all, passed away in Framingham Union Hospital May 8, 2019 after a period of declining health.

Charlie was born and raised in Saugus, a son to the late Walter Whitcomb and Ruth Ethel (Nourse) Longfellow. He proudly served in the U.S. Navy Reserve’s submarine service during his senior year and graduated Saugus High School, class of 1950. From 1951-55 Charlie served in the Air Force as a helicopter flight mechanic. Charlie was flight crew on high wind helicopter testing on Mt. Washington and a flight mechanic on a cross country helicopter flight in a record setting three days and proudly recalled using his mechanical skills and minimal available supplies to keep the copter in the air.

In 1956 he married the love of his life, Elaine Ruth Porter. They settled in Connecticut where Charlie went on to work in the aircraft industry at Pratt & Whitney as an experimental flight test mechanic and then as estimating supervisor for Combustion Engineering. After 4 years in Ohio as a plant manager, in 1979 the family moved to their current home in Northborough. He retired in 1996 as a Sr. Construction Engineer at RCI Riley Construction of Worcester.

Charlie is survived by his devoted wife of 62 years, Elaine; four children, Eric and his wife Marina of Waterbury Center, Vt., Cheryl Grant (her husband the late John Grant) of Westford, Kevin and his wife Regina of Nashua, N.H., and Gail Senecal and her husband Robert II of Deer Isle, Maine; 10 grandchildren; and three great-grandchildren. He also leaves his lifelong friends George Emberly and Bill McAdoo. Charlie was preceded in death by his siblings, George, Charlotte Navarro, Jean Raymond and Herbert.

A devoted family man, Charlie was loved by his family. He was more than a provider and teacher to them, he put his family first before his needs and was a true role model for all who knew him. He enjoyed a good round of golf, spending time in Florida and tinkering with anything mechanical. He was a longtime member of the Vincent F. Picard American Legion Post 234.

A Psalm of Life

Tell me not, in mournful numbers,

Life is but an empty dream!

For the soul is dead that slumbers,

And things are not what they seem.

Life is real! Life is earnest!

And the grave is not its goal;

Dust thou art, to dust returnest,

Was not spoken of the soul.

Not enjoyment, and not sorrow,

Is our destined end or way;

But to act, that each to-morrow

Find us farther than to-day.

Art is long, and Time is fleeting,

And our hearts, though stout and brave,

Funeral marches to the grave.