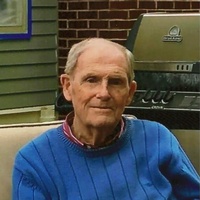 He is survived by his adoring wife of 28 years, Miriam A. (Early) Mitchell; a son, Mark D. Mitchell and his significant other Maria of Port Charlotte, Fla.; two daughters, Susan L. Mitchell and Sandra A. Pacek, both of Westminster; three stepsons, Patrick O’Leary and his wife Michelle of Shrewsbury, Timothy O’Leary and his wife Jennifer of Marlborough, and James O’Leary and his wife Kristin of Cedar Grove, N.J.; a brother, William L. Mitchell and his wife Anne of South Yarmouth; four grandchildren, Sarah Murphy and her husband Robert, Sean Mitchell, Nicholas Geneva, and Joseph Pacek; seven step-grandchildren, Teagan, John, Thomas, Katherine, Joseph, Riley, and Brady O’Leary; and several nieces and nephews. Vincent was predeceased by a sister and two brothers, Mary Maki, Thomas Mitchell, and Robert Mitchell.

He was born in Worcester, son of Irish immigrants, Thomas A. and Mary A. (Bowler) Mitchell.

Vincent graduated from Saint Peter’s Catholic High School in 1952 and later from Becker College, where he played basketball, and was later inducted into the Becker College Athletics Hall of Fame. He later served his nation proudly in the United States Army. He later settled in Boylston, before moving to Shrewsbury in 1991.

Vincent worked for the former State Mutual Insurance Company for 35 years, retiring as IBM Supervisor in 1991. Upon his retirement he became office manager for Quality Muffler and Brake, a job he really enjoyed.

He was a member of Saint Anne’s Church, the Shrewsbury Men’s Club, the Shrewsbury Senior Center where he was a regular at Roger’s Coffee Shop.  He enjoyed all sports that were Boston related and relished in the recent years of all the great championships.

His funeral was held May 13 from the Mercadante Funeral Home & Chapel of Worcester, with a Mass at Saint Anne’s Church of Shrewsbury. Interment, with military funeral honors, followed at Mountain View Cemetery of Shrewsbury.