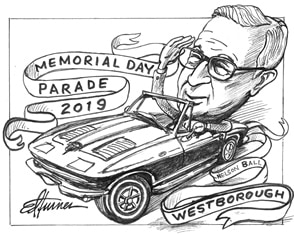 Westborough – The town of Westborough has named Nelson Ball as this year’s grand marshal for its Memorial Day parade.

Ball is a U.S. Army veteran who served in the Korean conflict where he was assigned to the Counter Espionage Section in Seoul. His duties included interrogating North Korean agents who were captured coming through the DMZ and those who came by boat down the coast.

In 1969 he opened his own business in Westborough (Ball Financial Services Company) and also became the charter president of the Rotary Club of Westborough. A true Renaissance man, he has been an avid volunteer with the Westboro Music Parents Association and the First United Methodist Church, introduced the sport of pickelball to Westborough in 1983 and has played trombone with the Interboro Concert Band for 23 years.

Shrewsbury native competes on ‘The Voice’