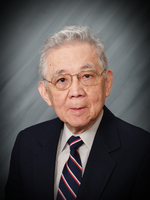 He was born in Nanking, China, son of the late Hong Wu and Sing-Zai (Kuan) Wu. Carl emigrated to the United States in 1952 and received his undergraduate degree from Hartwick College in New York and graduate degree of chemistry from the University of Iowa. He then met and married the love of his life, Shenshen Wu, and they had lived happily married for 49 years before she passed Feb. 4, 2017.

Dr. Wu was a Professor of Organic Chemistry at the University of Massachusetts-Dartmouth for 37 years before he retired. During his teaching career, Professor Wu was known for his dedication to his students and in 1994, he received the “Teacher of the Year Award.”

Carl enjoyed being surrounded by his family, especially his loving grandchildren. When not with his family, he enjoyed time with his friends at the Village at Orchard Meadows playing bridge.

He is survived by his loving children, Michael Wu and his wife Christine of Richmond, Texas and Margaret Saito and her husband Tony of Shrewsbury; his adoring grandchildren, Brian and Ben Wu and Jason, Darren, and Ryan Saito; his loyal sister, Carol Liu and her husband C.H. Liu and their daughter Faan-Chi Liu of Phoenix, Ariz.; many devoted cousins, Tom Chang, C.S. Chang, Shen Shey, and Lena Chang and their kind hearted spouses; and an abundance of nieces and nephews who have supported Carl and have given him great joy over the years.