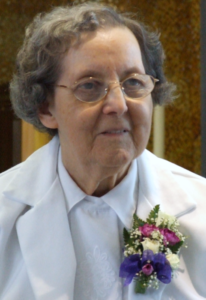 Born in Halifax, Nova Scotia, she was the second of ten children born to Fred and Marie Rose (Cormier) Gautreau. The family moved to Lynn, where Sr. Liliane attended St. Jean the Baptiste Schools and graduated from the former St. Anne Academy of Marlborough. A short time after graduation, she led the way for her two siblings who would follow her to Lachine, Quebec and to vowed religious life as Sisters of St. Anne.

After vows, Sister Liliane, now Sr. M. Anne Liliane, would begin a 30-plus year ministry in education. During those years, she earned a B.A degree in Education from Catholic Teacher College in Rhode Island, an M. Ed. in Education and certification in Reading from Boston College in Chestnut Hill.

Sister taught at the elementary and secondary levels and was a principal in schools staffed by the Sisters of St. Anne in Ludlow, Holyoke, Marlborough, Lynn, and Easthampton in Massachusetts and in Central Falls, Rhode Island. In later years, Sister Liliane enjoyed a ministry to the elderly, and also as a reading specialist and as a multi service aide in a large convent.

Sister Liliane was predeceased by her parents, three sisters and three brothers. Her death will be grieved by her brothers, Norman (Irene) Gautreau of Texas and Hervey (Maria) Gautreau of California; her sister, Sr. Noella Gautreau, SSA of Montreal; and many nieces and nephews, grandnieces and grandnephews and her religious family of the Sisters of St. Anne.

The viewing will be Saturday, June 15, from 9-10:15 a.m., at St. Anne Convent, 720 Boston Post Road East, Marlborough. The funeral Mass will follow at 10:30 a.m. in the convent Chapel, with burial in Evergreen Cemetery. Funeral arrangements are under the direction of Fitzgerald & Collins Funeral Home, (www.CollinsFuneral.com), 378 Lincoln St., Marlborough.

In lieu of flowers, a memorial contribution may be made to the Sisters of St. Anne Retirement Fund, 720 Boston Post Road East, Marlborough, MA 01752, or to a charity of your choice.