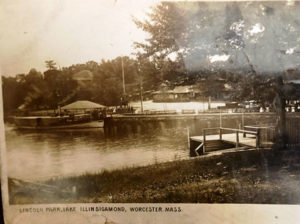 Shrewsbury – This photo postcard, although mislabeled as “Lincoln Park, Lake Illinsigamond, Worcester, Mass.”, is nonetheless a rare view.  Taken from the point of Ramshorn Island, it shows Lincoln Park in the background, complete with ladies in long dresses sitting on the benches that lined the shore. The photograph itself was taken in 1905, just as the White City Amusement Park was opening, in what would be a great rivalry between the White City and Lincoln Park.  Of interest also is the steamboat that is pulled up to the small dock.  The name of the boat on the bow cannot be made out, however it appears to be the “Venus”, which was one of the many steamboats that once transported large numbers of sightseers up and down the lake during those days.  Today, this same scene looks very different, with a high-rise condo complex on the spot where the steamboats pulled up, so many years ago.