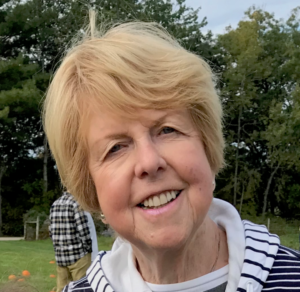 Westborough – Margareta A. Magenis (Greta) passed away June 17, 2019 at her home, surrounded by family, after a brief illness.

Greta was born in 1940 in Stuttgart, Germany. After graduating from Hoelderlin Gymnasium in Stuttgart, she worked in England as an au pair. She moved to Switzerland, living there for two years while working as a secretary and learning French to add to the German and Italian required for the job.

Greta came to the United States in 1965. She worked as a secretary with various companies in Massachusetts, including Compo, gaining both lifelong friends as well as an initial set of furniture from a now defunct employer.

She married John Magenis in 1971 and, after a one-day honeymoon in Nantucket, drove from Massachusetts to Great Falls, Montana for John’s job working on the Minuteman missile project. Over most of the next decade, the couple moved from Great Falls, to Cheyenne, Wyoming, to Grand Forks, North Dakota – where their son, Sean, was born – then Santa Barbara, California. In 1978, the family moved to Tanglewood Drive in Milford. Shortly after returning to Massachusetts, she became an American citizen. She remained in Milford until moving to Westborough in 2014.

Greta joined the congregation at Good Shepherd Lutheran Church shortly after returning from California, later finding strength in that community when John predeceased her in 1996. She remained an active member of the congregation throughout her life.

Greta began working for Digital Equipment Corp. as a secretary in the 1980s and remained with Digital – through its absorptions into Compaq and ultimately Hewlett Packard – until her retirement as a Program Coordinator in 2005.

Greta combined clear-eyed pragmatism with personal warmth – making and keeping connections wherever she went – maintaining friendships with neighbors, co-workers, and fellow church members which endured over time and time-zones.

In recent years she relied on her dogs, Lila and Bentley for company and as an additional motivation to stay active along with her many activities. It was through walking Bentley in Hopkinton State Park that she met John Gardner, her constant companion over the last months of her life.

Greta is survived by her son and his wife, Sarah; granddaughters Adeline and Isabelle; her brothers, Peter and Eberhardt Altreuther; her sister, Christiane; members of the Magenis, Rook, and Hughes families; and extended family in Germany and beyond.

A memorial service will be held Saturday, June 22, at 11 a.m., at Good Shepherd Lutheran Church, 183 West Main St., Westborough, with a reception to follow. Burial will be private.

In lieu of flowers, Greta has requested donations to Good Shepherd.