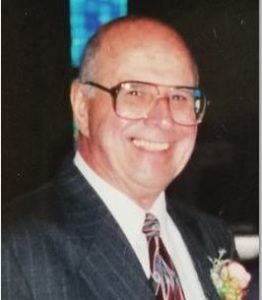 He leaves behind a daughter, Kathleen Mura and her husband Robert of Princeton; his son, John Bauer and his wife Maria of Framingham; four grandchildren, Alexander Mura, Julianna Bauer, Matthew Bauer, and Lawson Bauer; family in France and Quebec, as well as his nieces, Suzanne Tatro, Patricia Bauer and Gerry Argyle. He was predeceased by his brothers, John and Peter Bauer.

James was born in Worcester, son of Marius and Henriette (Barbey) Bauer, and lived there before moving to North Grafton in 1959.

He was a supervisor of the Metallurgical Laboratory at the former Riley Stoker Company for 27 years, retiring in 1989. He also worked at Wyman-Gordon in North Grafton as a metallurgical technician and metallographer for 12 years. While at Riley Stoker he was considered an authority on boiler tube failures. He wrote hundreds of reports and authored and co-authored many papers during his career.

James was a proud veteran of World War II, serving in Europe with the 214th Combat Military Police Company attached to the 6th Engineer Amphibious Assault Brigade. His unit landed on Omaha Beach, Normandy France on D-Day in 1944. He received 5 battle stars for having participated in Europe’s 5 major campaigns. His company received the “Presidential Unit Citation”, “The French Croix De Guerre” and Meritorious Services Wreath, Invasion Arrowhead and the combined Operations and Seahorse Amphibious Patch. His company was later attached to the 1st – 7th and 9th Army group as well as the 2nd British Army in Belgium. In 2008, the 214th M.P. Co. was featured on the History Channel. Being of French descent and fluent, he served as company interpreter for his unit and for the Provost Marshall’s Office.

He attended the Assumption Prep School in Worcester and graduated from South High School. He continued his studies at Clark University, UMass Boston, and MIT.

He enjoyed bowling, golfing and playing cards with his friends and family. He was a former member of the “American Society of Metals,” the International Metallographic Society and Greendale Men’s Club. He was a member of St. Mary’s Church for over 50 years.

A funeral Mass will be celebrated Wednesday, July 31, at 10:30 a.m., at St. Mary’s Church, 17 Waterville St., North Grafton. A calling hour will be held at the church at 9:30 a.m. prior to the Mass. He will then be laid to rest at Pine Grove Cemetery in North Grafton.

In lieu of flowers, the family asks that gifts be made to support our veterans in the memory of James to Project New Hope, 70 James St., Suite 157, Worcester, MA 01603.