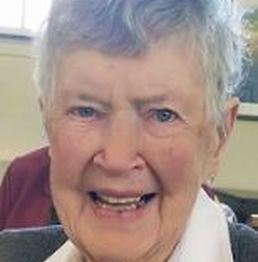 She leaves her daughter, Cheryl Fay Lauria and her husband, Joseph. She was predeceased by her siblings, Geraldine Elmer, Kathleen Johnson and Thomas Foley.

Peggy was born April 10, 1928 in Worcester, daughter of the late Catherine (Curnin) and Robert Foley, and her roots were in the city where she grew up and graduated from Commerce High School.

She attended Worcester City Hospital School of Nursing and went on to a career as a Registered Nurse of which suited Peggy perfectly as she was a caregiver who spent her life putting others first. She worked at Worcester City Hospital and Notre Dame Institute before she retired from nursing in 1993. She was also a devoted parishioner and CCD teacher at her parish of St. Mary’s in North Grafton. Peggy held memberships at Worcester City Hospital alumni, Worcester Diocesan Council of Catholic Nurses, Mass. Mental Health Nurses Association along with the Women’s Club and Bereavement Committee at St. Mary’s Church. Peggy adored flowers and tending to her perennial garden which was admired by many of her friends and neighbors.

All are welcome to join Peggy’s family Wednesday, Aug. 6, from 4-7 p.m., at Roney Funeral Home, 152 Worcester St., North Grafton. A funeral Mass will be celebrated Thursday, Aug. 7, at 11 a.m., at St. Mary’s Church, 17 Waterville St., North Grafton. She will then be laid to rest at St. John’s Cemetery in Worcester.

A Book of Memories to share a memory of Peggy or message of sympathy is available online at www.RoneyFuneralHome.com.