Westborough – Katherine Anderson has long had an interest in abandoned buildings.

“My parents and my grandmother always loved them too,” she said. “I definitely got my interest from them.”

Anderson, who is a veteran special education teacher, has also always had a passion for writing.

For many years she has researched and photographed over 50 former state hospitals, prisons, and reform schools throughout New England. She has published several nonfiction works and lectures on the history of mental illness.

“I’m hooked on the histories of these facilities,” she said, “and have translated that into my career. I am so interested in figuring out the stories that went on behind these walls.”

Recently, she completed her latest book, which is about the former Westborough State Hospital. On Aug. 1 she held a lecture at the Westborough Public Library to discuss the book, which she started researching in 2010. 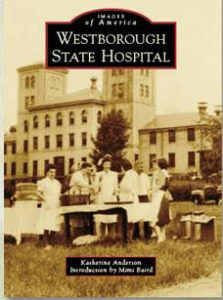 The book is part of the series, Images of America, and is published by Arcadia Publishing. In it are nearly 200 images of the former hospital property, many of which were provided to Anderson by Westborough historian Phil Kittredge and Anthony Vaver, the Westborough Public Library historian.

“I am so grateful to them,” Anderson said. “They were so helpful to me – I could not have done this without them.”

Also assisting her in her research were Daniella Trammell, direction of communication and community engagement and Kristin Kulig, program coordinator, both from the state’s Department of Mental Health. Mimi Baird, the author of “He Wanted the Moon: The Madness and Medical Genius of Dr. Perry Baird, and His Daughter’s Quest to Know Him,” which in part details her father’s experience as a patient at Westborough, also shared a poignant introduction in Anderson’s book.

For over 100 years, the hospital, located on the outskirts of town on Lake Chauncy, was home to hundreds of patients. In 2010, the state, which owned the hospital, abruptly closed it and moved the patients to a Worcester facility. The dozens of buildings then sat in a state of disrepair until being bought by Pulte Homes, who are now building an over 55 community on the property. (www.delwebb.com/homes/massachusetts/greater-boston-area/westborough).

From its early days in the 1880s as the cruelly named Westborough Insane Hospital to its later incarnation as a state hospital, the facility was home to many patients who were there for much of their lives. Many suffered from mental illness and were too ill to go back home to their families who could not or would not support their complex needs.

In Anderson’s book, she notes how the hospital actually started off as the Massachusetts State Reform School, the first state-owned reform school in the country. It later became best known, she writes, as the “second homeopathic hospital for the insane in the United States and the first example of institutional reuse in the nation.”

The book is an unflinching look at the hospital but also notes the accomplishments of Dr. Solomon Carter Fuller, an African American pathologist who spent much of his career at Westborough studying the physical changes made to the brain by Alzheimer’s disease. And when it closed in 2010, Anderson notes, it was the only state hospital in New England with a dedicated unit for deaf and hard of hearing patients.

As the book concludes, it ends with a description of the fate of the approximately 600 patients who are buried in the paupers’ section at the town’s Pine Street Grove. When those patients passed, they were not claimed by family members, thus they were instead buried in plain cardboard boxes, with only a small stone numbered marker to note their grave. A group of citizens has now formed the Westborough State Hospital Cemetery Project to raise funds for a memorial to honor those patients.

The book “Westborough State Hospital” is now available for purchase through online sites.